So-called “spike-and-slab” models are a prominent choice for prior distributions of parameters in Bayesian analysis, consisting of a probability “spike” at a value of a priori interest (often a “null” value) and a “slab” distributing the remaining probability mass across the parameter space. Rouder and colleagues (2018) provide an excellent discussion of these archetypal models in Bayesian analysis, and provide a formulation of the spike-and-slab prior using a Dirac delta “function” to represent the spike as a point mass with infinite probability density.

A neologism for these models which I’ve come up with (and which is original, as far as I can tell from searching the internet) is that of the “pincushion prior.” The “slab” portion of the prior resembles a pincushion (especially when convex overall), and the “spike” resembles a pin inserted into the cushion from above. Perhaps this construction isn’t particularly helpful to anyone, but I find it an accurate (and possibly amusing) portrayal of what a spike-and-slab prior looks like.

As an example, a convex Beta prior over a parameter space from [0,1] provides a nice pincushion, and a Dirac delta spike at the midpoint provides a nice pin. The illustration is shown below, and (following the notation in Rouder et al., 2018, where

denotes the Dirac delta function and

denotes the Beta density) the prior distribution is given as:

Because the “head” of the pin exists at discrete location above the pincushion, but the spike has infinite density (extending upward infinitely along the y-axis), I have included a dashed line with an upward-pointing arrow above the head to indicate this. 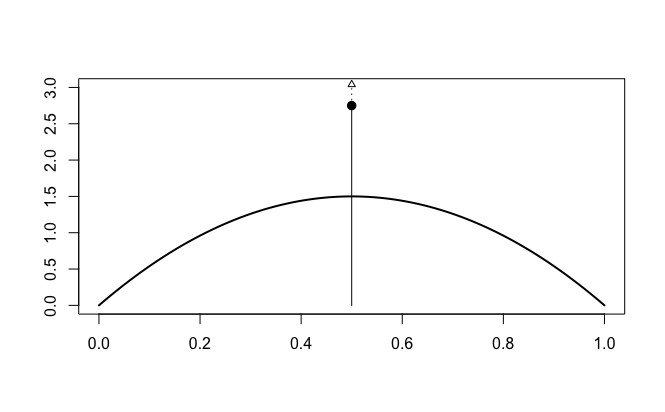